Back to front page Back to Headlines Feedback

Since I participated in the "Battle in Seattle" in 1999, I have been speaking at every opportunity against what the big corporations call "globalization." I talked mostly about the way our jobs and benefits have dropped because of the government's "trade" policies. Later, I was joined by Margarita Alvarez, President of Voices for Immigrants. She talked about the pain and suffering south of our border that is caused by the same corporations and the same "trade" policies. Margarita says that the giant influx of immigrants into industrialized countries is caused by the corporate destruction of their jobs and family farms at home. 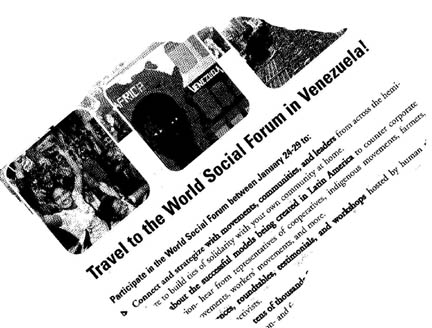 On September 24, when Margarita and I were marching together in Washington, somebody handed us a leaflet for the World Social Forum in Venezuela January 24-29, and we resolved to go if at all possible. It will be a wonderful way to gain information and perspective on this great international fight.

We're asking other Texas activists to help us get the word out about gobblelization. Please let me know if you'd like to be part of this important effort.

Back to front page Back to Headlines Feedback