Reverend Eric Folkerith helped raise $375 at the Nodding Dog Coffee Shop in the Bishop Arts District of Dallas on September 12. The next day, American Airlines posted a special $169 air fare to Washington DC, and anti-war activists are grabbing up the seats!

People who cannot afford the full fare are being encouraged to contact me or the Dallas Peace Center for an allocation from the funds that have been raised and/or pledged. The special discount air fare is only good until Friday, September 16th, so quick action is essential. The September 24 national anti-war march will be the first big opportunity to mobilize the American people since polls began to show that the majority would like to see the troops brought home rapidly. 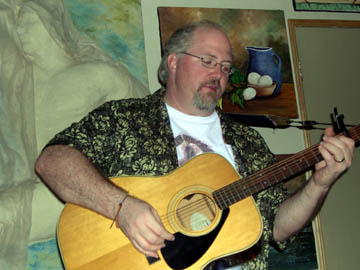 We have about 70 North Texans signed up to go to Washington. Some of them are hoping to go by ground transportation, and vans may be leaving on September 22-23, but ground transportation will not be cheaper than the special discount air raise because travelers have to budget for work time lost, meals, and housing.

In addition to the money raised, a few outstanding pledges for transportation money remain. The pledgers are encouraged to get their money in before the discount air fare is ended. The sooner the money arrives at the Dallas Peace Center, the sooner we can make commitments for a big North Texas delegation. Send tax deductible donations to the DPC at 4301 Bryan # 202, Dallas, TX 75204-8147. Mark checks "For DC" unless you prefer your donation go into the DPC's general fund. We are also looking for vehicles that can make the 25-hour trip to DC.

Those who would like to go can send their information to the DPC or to me. Include contact info, special travel needs, and whether or not you have the estimated $200 travel money for ground transportation. If you have less than $200, include the amount you have. Planning meetings occur each Tuesday evening at 7 PM at the DPC; all are welcome.

Peace activists are also planning a concert in downtown Dallas on September 24.