The Retiree Club at UAW Local 848 in Grand Prairie heard from Sister Lanita Neadle of AFGE (American Federation of Government Employees) Local 1006 during their monthly luncheon on August 10. Neadle's father, James Lambert, is an officer of the group.

Neadle said that the government continues to plan new prisons, but does not budget the money for them. As AFGE cannot legally strike, they depend very much on political pressure to help their members. 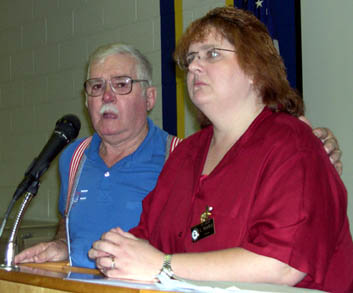 James Lambert also favored the group with a quick story: It seems that Evangelist Billy Graham decided he'd like to see what it was like to drive a limousine. Unfortunately, a Highway Patrolman pulled him over. After examining his driver's license, the patrolman scurried back to his radio and called his headquarters with this worried message: "I think I messed up. I pulled over somebody really important! It might be Jesus Christ, because I swear he's got Billy Graham for a driver!"

The retirees had their monthly discussion of important business, then had a fine lunch of fried chicken.