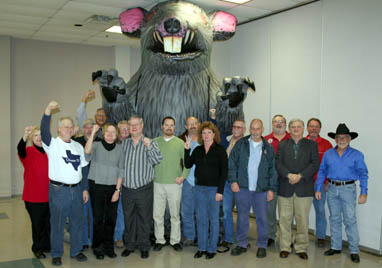 The Dallas Central Labor Council generally meets at 7:30 PM each third Thursday. All members of affiliated unions are welcomed. The February 14 Executive Board meeting had to share the room with a giant inflatable rat that Communications Workers Local 6215 was planing to use for a public action the next day. Some of the main business was reviewing the candidates for the March 4 primary. Three new endorsees were added to those already listed. The complete list is below.

Financial Secretary Treasurer Jim McCasland, the principal officer, announced that the annual Golf Tournament would take place on October 2. All members were encouraged to participate in politics, and to wear their union colors when they do. The labor federation continues its dedication to health care reform. Public activities are expected in April.

Prior to the meeting, former Firefighter Ken Bailey presented a precinct delegate training in the CWA hall. It was packed.

Union leaders interview candidates and investigate their backgrounds and voting records that are relevant to working people's concerns. Then, they make recommendations that union members may follow if they so choose. The AFL-CIO had not endorsed a presidential candidate as of February 6, 2008, although some of the national union leaders had expressed their preferences.

(List includes contested local primaries only; Contest is not included if no endorsement has occurred)

Listed below are the Dallas County candidates endorsed for the 2008 Primaries. More endorsements may come later. Of these candidates Don Adams, Eric V. Moye, Lupe Valdez and Roberto Alonzo have opponents.

Other Central Labor County organizations have endorsed local candidates, but the information has not reached me.