The "Bread and Roses" Cultural Project came to Dallas on May 15. The City will show photographs created by American workers, in collaboration with professionals, for the rest of the month. Displays are at City Hall, Convention Center, and the Public Library. There are more photos at Creative Arts Center of Dallas, 2360 Laughlin Dr. Works from this cultural project are gathered into a new book, Unseen America by Harper Collins, on sale with the photo displays. There are 400 of these cultural projects in the nation.

Bread and Roses is a project of the Service Employees (SEIU) 1199 union. They organize health care workers. A local project involving union people was announced by Celia Barshop and Danielle McClelland at the opening reception. They can be reached at 214-939-2701 or 214-670-3029. Workers who would like to be more involved in creating art work could check with them. 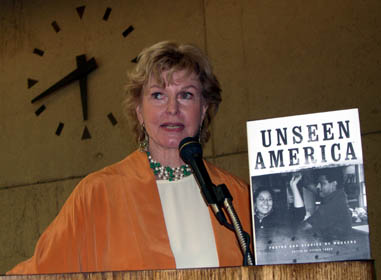 Three members of UNITE-HERE and two members of UAW 848 attended the opening along with 30-40 art appreciators. Mayor Pro Tem Dr Elba Garcia welcomed the exhibit to the city.

During May, there are major exhibits in New York City, Cleveland Ohio, Washington DC, Albany NY, Madison Wis, Chicago Il and Dallas. The display was in the Dept of Labor during the previous month.