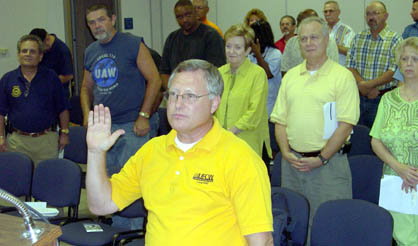 The AFL-CIO recently announced that 2,600 local unions from the "Change to Win" federation have re-joined their AFL-CIO councils. In Dallas on September 20, a delegate from United Food and Commercial Workers Local 1000 was sworn in. The UFCW International went out with Change to Win during the big split led by the Service Employees (SEIU) a few years ago. Labor stands more united today than at any time since then.

Labor's unity showed during the 2006 national elections, when union-endorsed candidates displaced some of the most rabid anti-worker politicians. Dallas County drew a lot of attention by changing from almost totally Republican to almost totally Democrat. On the day of the CLC meeting, Judge Creuzot and State Representative England announced that they were leaving the GOP for the Democratic Party.

The Dallas AFL-CIO has picked up other previously unaffiliated union locals recently. They will be challenged to raise as much money as possible at their golf tournament October 4 at the Sherrill Park Golf Course, 2001 E Lookout Drive (at Jupiter) in Richardson. CAll 972-234-1416 for info. Call the AFL-CIO at 214-826-4808 to help with the tournament.

Starting now, many top unionists will be focusing on the 2008 local, state, and national elections!