CLC is Hot Spot for Labor

All affiliated union members are welcome at the monthly AFL-CIO meetings at 7:30 PM each Third Thursday at the CWA hall, 1408 N Washington in Dallas. Meetings are growing more and more exciting as America's labor movement copes with national and state government attacks.

At the February 17 meeting, unionists were proud to note that the spread of deadly asbestos in Garland had been halted by state agencies. The Texas AFL-CIO had taken a strong stand in an earlier Ft Worth case where corporations claimed that spraying an asbestos-laden demolition site with water was sufficient to save people's lungs. We were asked to continue pressure to stop asbestos-related diseases.

James Holbrook handed out a copy of "Lou Dobbs Report" blasting Bush's Social Security plans. An excellent UAW leaflet was also passed around. Several delegates signed a petition against privatizing. Principal officer Jim McCasland encouraged everyone to attend a Social Security meeting at the same site on May 4 with Congresswoman Eddie Bernice Johnson.

Gerardo Contreras encouraged everybody to join the Labor Council for Latin American Advancement (LCLAA). Gene Lantz asked for even larger efforts in the fight to save Social Security. Reecie Giesecke invited all the unionists to Local 848's celebration of Black History. Kevin Tinker (silver jacket, below) explained the Bush Administration's efforts to undermine federal employees' unions. His local will soon be a new affiliate. A McKinney fire fighter asked for help in improving members' benefits. 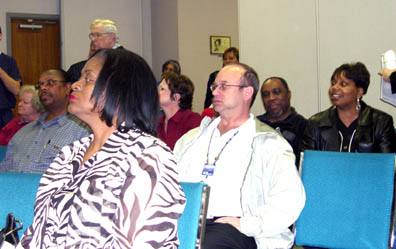 A growing number of North Texas high-school students, including 3 from Local 848, asked for Texas AFL-CIO scholarships. A Teamster representative asked for help with a nationwide organizing campaign at Cintas Laundries. The Dallas City Employees, affiliated with the Steelworkers, brought up some of the issues in the "Strong Mayor" proposal being considered in the May elections. 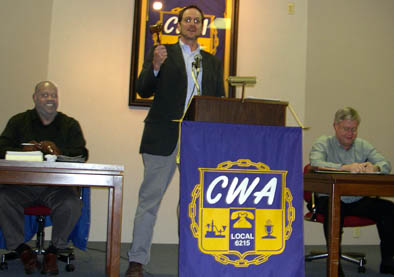 It was the final meeting presided over by President Kenneth Kirk (at left) of the Amalgamated Transit Union (ATU). He called his service a "Pleasure and honor." The delegates gave him two standing ovations.

Kym Grant (standing, below) of the Doctor's Guild also had information about the expected changes in Workers' Comp. 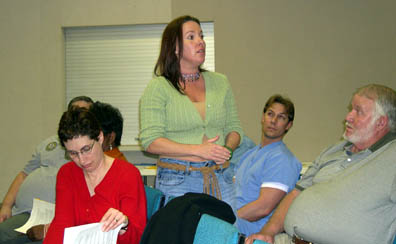 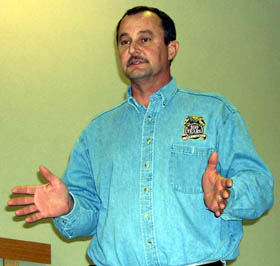 John Palmer of the Teamsters union asked everyone for help on an important organizing campaign at Cintas Laundries.

The next meeting, March 17, will continue to inform and energize the North Texas labor movement