On a unanimous voice vote, delegates to the 2008 Texas Committee on Political Education (COPE) conference, including the UAW delegation, endorsed the following candidates for the March 4 primary election:

The COPE conference took place in Austin January 19-20. Almost 300 union activists came in from all over the state. Four workshops took place:

"The Erosion of Employment -Based Insurance"

"Dollars and Change: The 2008 Election Outlook" 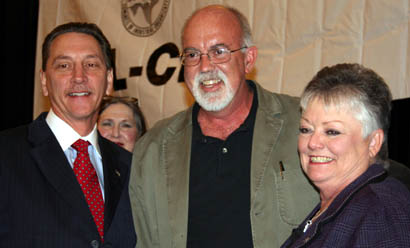 Stewart Acuff, head of the National AFL-CIO Organizing Department, made a stirring speech that emphasized the lessons of Dr. Martin Luther King Jr as relevant to unionism. Acuff fairly brought the house down with his message of the inherent justice in the labor movement and labor's great hopes for 2008. Acuff, center, is pictured with Paul Brown and Becky Moeller of the Texas AFL-CIO>

George Kourpias, National President of the Alliance for Retired Americans, talked about the growing importance of union retirees in election campaigns. He drew exhilarating applause with the only reference to President George Bush that was made at the conference. Kourpias predicted, "Texas will have a new retiree next year!"

Chavez-Thompson said, "Pancho was a man who spoke for the many who were denied a voice." She went over some of the many highlights of his long career as a union and civil rights activist. He was one of the few unionists to have played a role in virtually all of the major civil rights events of the 1960s and 1970s. His successful lawsuit against a captain of the Texas Rangers stopped their long union-busting history.

Dallas City Councilwoman Pauline Medrano, while accepting the award in the name of her father, led the entire family in reciting Pancho's most famous motto: "In America, everything is politics. From the day you are born, until the day you die."