This month, our fight for the right to organize will focus on March 31, Cesar Chavez' birthday. Chavez and the United Farm Workers were devoted to organizing as the way to solve the problems of low-wage workers. Organizing drives among Spanish-speaking people are among the most promising in this period.

We worked with State Representative Roberto Alonzo to plan a breakfast celebration beginning at 8:30 AM on Saturday, March 31, at Morelia's Restaurant, 2707 W Jefferson in Dallas. Morelia's is just west of Hampton and south of Highway 30. Thanks to these organizations who have already volunteered to help: Dallas AFL-CIO, Texas Labor Council for Latin American Advancement (LCLAA), and Voices for Immigrants. As always, Jobs with Justice seeks to unite progressive organizations and individuals around solving the problems of working people.

Our monthly Second Wednesday meeting, 7 PM March 14 at Oak Cliff Methodist Church, 547 E Jefferson in Dallas, will work out details for the birthday celebration and other efforts to defend and advance the right to organize in America. We'll discuss our continuing petition drive that is based on the AFL-CIO on-line petition at http://www.unionvoice.org/campaign/signthe_EFCA. We'll get the details on joining LCLAA for the Chavez march in Ft Worth at 11 AM on March 31. We will talk about the Student Labor Action Program (SLAP) and their week of action March 27-April 4. 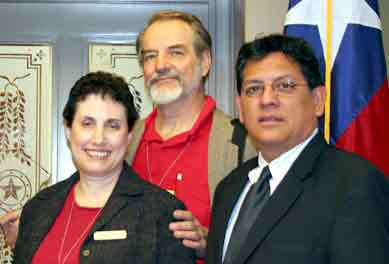 As usual, participants will also share information about other activities and programs of interest such as the peace actions in North Texas on March 17 and 19, progress in Congress for the Employee Free Choice Act, and efforts leading us toward a solution to the national health care crisis.