On June 19, North Texas Jobs with Justice did our part in a nationwide fight to preserve democracy and the right to organize in America. The AFL-CIO reported that there were 100 public events around the nation, and that 4,500 workers and allies turned out in Washington DC to put the heat on the U.S. Senate to pass the Employee Free Choice Act. A vote is expected in the next few days.

American democracy is at a crossroads. The agonizing decline of American rights and freedoms is being challenged in the U.S. Senate by the Employee Free Choice Act, which passed the U.S. House resoundingly. Congresswoman Eddie Bernice Johnson was a co-sponsor. If the Act becomes law, America may see a new flourishing of rights and freedoms. If it fails, the stakes become even more crucial, and the fight will burn brighter and longer.

Dallas progressives gathered at 7 PM in the Fellowship Hall behind Munger Place United Methodist Church, 5200 Bryan at Munger in East Dallas. Reverend L. Charles Stovall welcomed the group and introduced our distinguished panel for the Jobs with Justice Workers Rights Board. Panelists were (left to right):

Dr. Ron Wilhelm, an educator from North Texas University and a founding member of the Progressive Christian Alliance.

Union organizers and activists provided testimony about how difficult it is under the labor laws originating in the early twentieth century, and cruelly distorted since the Reagan years began, for American workers to exercise their right to organize. The speakers relayed firsthand testimony of employer tactics, both illegal and legal, to deny rights to their employees. Most commonly, the employers delay the drawn-out process while they bribe some of their workers, fire others, and intimidate almost everybody. 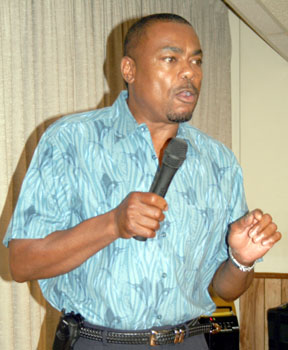 UNITE-HERE sent a special delegation from Houston, but they were delayed by weather and traffic problems.

Senator Cornyn declined his invitation. Although we came from many different organizations, the group was drawn together by our common concern and the heartfelt expressions of everybody who spoke. We ended with a series of announcements of upcoming events from ACORN, Ernest McMillan, the National Nurses Organizing Committee, and others. The events will be posted on this site as information comes in.

On June 20, Bonnie Mathias, Hobie Hukill, and Gene Lantz conducted "right to organize" discussions on talk radio KNON 89.3 FM from 7 to 9 AM.

Everyone is encouraged to contact their senators. One way to do it is through this web page:

It is also possible to reach public officials from the home page of this web site.

As we fight for passage of the Employee Free Choice Act (S. 1041) in the Senate and in coming days, we all are keeping in mind the bottom line for passage of the bill: America's workers. North Texas Jobs with Justice is dedicated to fighting for the Employee Free Choice Act from now until the day it becomes the law of the land. We will speak for it at every opportunity, we will petition for it, we will lobby for it, and we will work to organize a social movement to overcome all resistance!