Each in their own way, progressive organizations are uniting their efforts during this vital 2006 election year. The February 28 special election in State Legislature District 106 was a good example. Among the participants were unionists, environmentalists, feminists, and civil rights activists. On the day after the election, the Workers Beat program on KNON radio featured interviews with civil rights leader Lee Alcorn and environmentalist Molly Rooke (pictured in red shirt below). Both interviews were taken at Katy Hubener's campaign headquarters. Previous interviews included several union activists. 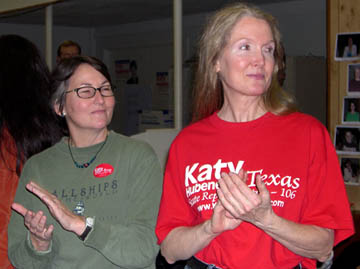 The Texas governor's campaign will undoubtedly split the electorate in several ways. There will be "minor" parties running against the incumbent Republican and a challenging Democrat. Additionally, there will be right-of-center and left-of-center independent candidates.

The Texas Secretary of State, who must be counted as part of the governing far-right coalition, has made it clear that he will place as many obstacles as possible to all challengers. Unfortunately, there is quite a bit he can do because of Texas' extremely difficult petitioning laws and because the right wingers have already demonstrated their willingness to bend and stretch the legal structure. We can expect battles in court as well as in the streets and at the ballot boxes.

Through it all, progressive Texans are learning to work together.