Get Free Tickets, Join the War for Health Care!

For free tickets to the opening of the new Michael Moore movie, "Sicko," contact Richard Stephens of the National Nurses Organizing Committee, scout7610725@yahoo.com. Do it now.

The film opens tomorrow night, Friday June 29, on three screens at the Angelika theater at the Mockingbird Train Station (Mockingbird and Central Expressway). At 9 PM, Jobs with Justice will participate in a panel discussion of the importance of this film. I've been calling it the "first shot" in a war for health care reform that will last through November, 2008. The film is wonderful, the war should be even better. 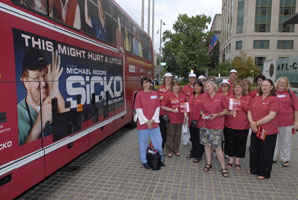 Nurses are gathering around movie openings all across America

**
Despite the tropical rains and airplane cancellations, six of our delegates made it to the U.S. Social Forum in Atlanta. Around 10,000 delegates are there now. They are building a truly unified movement for social justice in America, according to Jobs with Justice national. We'll have a strong report-back.

**
Our action for Employee Free Choice was one of 100 successful meetings across the nation. However, a minority of U.S. Senators were able to block the vote. It hurts, but it doesn't mean a thing in the long-term effort to win this vital right to organize. Keep gathering petitions and building the movement!

**
"Fast Track" authorization comes up for renewal June 30, but the silence from Washington is deafening. Public Citizen says that the bi-partisan compromise over the pending gobblelization bills does not meet any of the goals of working people nor environmentalists. Some of the unions are working hard to defeat the "agreement" with Colombia because they murder unionists there. Others are working against the one with South Korea because it would further destroy our domestic auto industry. If you were hoping, as I am, to see a united effort to oppose all four of the pending "trade agreements" and throw "Fast Track" into history's gutter after them, then the signs aren't good.

Texas Fair Trade Watch called for a telephone conference July 10 when we'll find out what happened, but that will be after the fact. You can always contact political representatives from the front page of our site: www.labordallas.org

**
SEIU 100 is trying to organize the minimum-wage laborers performing vital City of Dallas services. Call 214-823-2001 or write seiu100txda@acorn.org if you can help.

**
Our next planning meeting is 7 PM on the second Wednesday, July 11, at Oak Cliff Methodist, 547 E Jefferson in Oak Cliff. Entrance and parking in rear. There will be a lot of planning to do.