North Texans took two buses to Taylor, Texas, on June 23 to demand that the for-profit immigrant detention center there be shut down. Activists from Amnesty International, ACORN, the Islamic Legal Foundation, and the Dallas Peace Center were prominent. At Taylor, other buses from major Texas cities joined in the rally. 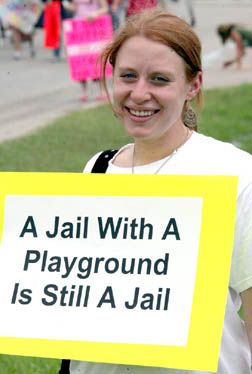 Beth Freed is serious about civil rights, civil liberties, and American freedoms! She maintains that the detention of immigrant children at the Hutto facility is not in keeping with American values. 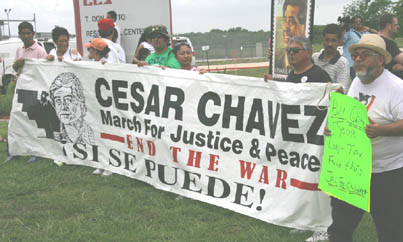 In the name of Cesar Chavez, these activists demand decent treatment for detainees.

Here is the press release before the action:

The Hutto Residential Facility is a privately-run, for-profit prison that houses mostly women and children, which is a violation of international law. Under Immigration and Customs Enforcement (ICE) jurisdiction, the former medium-security prison was contracted to the Corrections Corporation of America (CCA) in May 2006. While the CCA pockets the profits of children's imprisonment, they make campaign contributions to both political parties that enable this whole process to exist.

Almost 500 people are detained at the prison, with fathers usually being separated and sent to West Texas. Many of the inmates are refugees who have applied for political asylum, but usually whose lawyers have fumbled the ball and missed deadlines. The inmates are non-criminal, hard-working families, the type that America wants to attract. The ACLU has filed several lawsuits against Michael Chertoff, Secretary of the Dept. of Homeland Security and six officials from I.C.E. on behalf of 17 detained children.

Already, a report of sexual abuse has been filed, resulting in one employee's termination. The guard was having sexual relations with an inmate in her cell, in front of the children. Children are expected to adhere to the rules that inmates must follow, waking for a prison food breakfast at 5:30 a.m. They are threatened with separation from their mothers if they misbehave or play too loudly.

Amnesty International has partnered with the Free the Children Coalition, a network of Texas and national activists, to plan Hutto Vigil X (ten). It has been planned in conjunction with International Refugee Day, June 20. See below for event details. Activists are calling for the closure of Hutto, to be replaced with ankle-monitors or halfway-house residential alternatives, which are currently in use in the Northeast U.S.

Children and Families for Humane Treatment Alliance (CAFHTA) is a DFW-based coalition including LULAC, CAIR-DFW, Muslim Legal Fund of America (MLFA), the Dallas Peace Center and others. We will be meeting on Saturday, June 23 in Richardson at 7 a.m. and Irving at 7:30 a.m. to leave on a bus for Taylor.

We would appreciate any media attention on this important national issue and the local efforts that are organizing to reform it. See below for more details.

Text Box Information:
What: Hutto Vigil X, sponsored by Amnesty International, Free the Children Coalition
When: Saturday, June 23 all day, with the official speakers from 1 p.m. to 3 p.m.
Where: Hutto "Residential" Facility, 1001 Welch Rd, Taylor, TX, 76574
How to get involved: Visit http://groups.yahoo.com/group/CAFHTA/

Bus Info (For the media, not for publication): The bus pick-up locations are: Islamic Association of North Texas, 840 Abrams Road in Richardson at 7 a.m. and the Islamic Center of Irving, 2555 N. Esters Rd in Irving at 7:30 a.m.

For more information, visit these links:

Corrections Corporation of America: A Critical Look At Its First Twenty Years
http://www.soros.org/initiatives/justice/articles_publications/publications/cca_20_years_20031201