Teamsters Win a Big One for Our Side

Activists will have a chance to congratulate successful sanitation workers when they march together in the Dallas Martin Luther King parade/march on January 17. Click here for instructions. 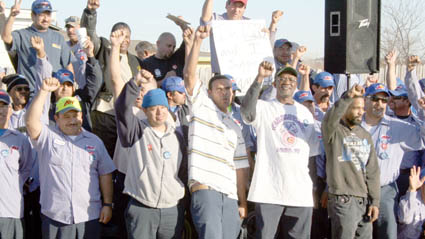 "Some of the bravest workers in Texas," according to Teamsters Local 767 President Wesley Jenkins, are sanitation workers in the suburbs of Fort Worth. They have waged an almost constant battle for dignity on the job since 1997. On January 15, Martin Luther King's birthday, they notched a big win by defeating a management decertification effort by more than a 2 to 1 margin!

Teamster organizer Sandra Jimenez put out a call for solidarity two weeks earlier on KNON's "Workers Beat" radio program. She explained that the workers who pick up the trash face dramatic safety issues with problems such as hypodermic needles in the trash. They have had a number of grievances against their employer, Allied Waste, but the main reason for their fight was the simplest and most universal demand of all working people: Dignity on the Job! Jimenez, backed up by sanitation worker expert Chuck Stiles of Atlanta, explained that the company had resisted their employees' efforts to organize in every possible way for over a decade. Their most recent effort was led by a "hired gun" attorney from a professional union-busting firm.

The number one strategy that companies use is to stall. Like insurance companies, they subvert the law by refusing to act in good faith for months on end. They sit in their warm offices and do their best to starve out any worker dissent. By utilizing the rumor mill, and with the coooperation of any scabs they can buy out or intimidate, they try to divide the workers from each other and from any possible support they might have.

Jimenez and Stiles, on KNON radio, explained that the Employee Free Choice Act, currently being considered in the U.S. Congress, has a number of features that would strengthen the workers' movement. Chief among them, the organizers agreed, is the time limits imposed on the organizing process that would take away management's foulest strategy -- stalling.

On January 15, Allied's high-priced union busting lawyer failed miserably! Not only did the employees at Allied Waste stand together to vote down the decertification process, they brought in supporters from a half dozen other Teamster locals, from another half dozen unrelated unions, from the Tarrant County AFL-CIO President T.C. Gillespie, Jobs with Justice, and a dozen or so young activists from Arlington, Fort Worth, and Denton! We rallied in a field near the company headquarters.

The lessons of history were remembered in this union struggle, because Dr. Martin Luther King Jr himself was busy helping Memphis sanitation workers in a similar fight when he was murdered! The theme from the Memphis fight, "I Am A Man!" was evident at the Teamster rally, and will be evident in the Martin Luther King parade/march on the 17th.

One of the most dramatic moments in the rally came when President Jenkins asked the unionists to line up in two rows, facing one another. Then, each of them told their co-worker, "I've got your back!" The demonstration ended with brotherly hugs all around! United, the workers went on to crush the company's union-busting scheme! As soon as the ballots were counted, Sandra Jimenez wrote to Jobs with Justice, "I am beyond pleased to inform you that we won!!! ....our Allied Waste unit is truly the best example of steadfast unity and tough resistance against everything that is wrong with labor in America today - they are exactly why we must work to pass EFCA [Employee Free Choice Act]. We cannot thank you enough for your support and assistance."