On February 14, a dozen North Texas activists gave up part of their Valentine's Day to plan activities with Jobs with Justice. For the first time since the Immigrant Workers Freedom Ride of 2002, we met at the UNITE-HERE! offices at 2639 Walnut Hill#203, Dallas, TX 75229 at 6:30 PM. Organizer Willy Gonzalez translated the entire meeting into English and Spanish.

Gonzalez proudly told us that an all-immigrant laundry workforce had just been organized in another city. The Angelica fight was a victory for labor. A national campaign for hotel workers is coming. Immigrant women are the largest part of hotel employees. Expect a rally March 1 in Washington.

Elaine Lantz of United Auto Workers Local 2320 talked about meeting national requirements for a fully-registered Jobs with Justice chapter. She lined up several participants for roles in the subcommittee on official structure.

Margarita Alvarez of Voices for Immigrants said there will be a vigil for the martyred Monsignior Romero at the Guadalupe Cathedral on Ross Avenue in Dallas 5-6 PM on 24 March. She added, "Christ is being taken hostage by the rich."

Dr. Jeorg Rieger reported on a relatively new organization, the Christian Progressive Alliance. We expect to work with their subcommittee on economic issues. Previously, they were The Dallas Committee for Economic Justice. Dr. Rieger suggested we get the Workers Rights' Board going. Willy Gonzalez said it should investigate conditions of all immigrants, not just Latinos.

Gene Lantz of UAW 848 did a quick outline of pending congressional action on the Sensenbrenner bill, which passed the House in December. The Senate is expected to bring their version out in late March. Sensenbrenner would criminalize all undocumented workers and everybody who helps them in any way. Thus, our union organizing efforts are at risk. A proposal of distributing petitions, sample resolutions, and call-up information was agreed on. March 1 was set as the target call-up date. People were encouraged to call Senator Cornyn's local offices, as he has a key role in forming the new legislation. Local numbers are on the Senators' web sites:

Howard Haraldson of CWA6201 offered to bring signed petitions from North Texas personally to Senator Cornyn's office in Washington. He also announced that progressive movies are being shown each Sunday evening at 1919 Hemphill in Ft Worth. He has arranged for singer Anne Feeney to perform at the Tarrant County AFL-CIO on Rufe Snow on Friday, February 17.

Our materials are already available on this site. Please download them and get started on this urgent work. 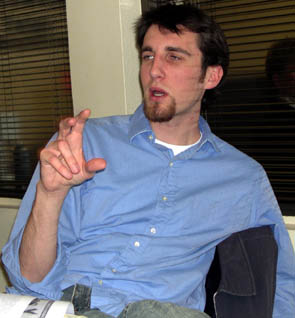 Steve Dooley said that ACORN has a new program to fight utility rate increases. Gene offered to help with retiree outreach. At the end of 2006, the state of Texas will have no power over rate setting. Legislation requiring a utility to be the "provider of last resort" (PLR) in each area will also disappear; consequently, people can be completely cut off from their utilities at the whim of the corporations. Expect a campaign kickoff around March 23.Steve expects to check with IBEW about how ACORN's work will affect union members at TXU.

Steve also reported on work against Wal Mart policies. They want a store every 8 minutes in metropolitan areas.

ACORN is helping with tax returns at 5353 Maple#200. A big ACORN delegation went to Washington to demand help for Katrina victims. ACORN has fixed up 600 houses in New Orleans, more than anybody, including the federal government.

The meeting closed with a "round robin" session that allowed everyone to speak their mind. The chairperson forgot to "pass the hat" to collect funds.