Leaders of the immigrants rights movement in North Texas and their supporters gathered at an Oak Cliff restaurant to celebrate “Immigrants Rights Day” and plan future activities. Jorge Del Cid said that a vigil will take place in early January, and that immigrants plan to take part in Martin Luther King Day activities.

Channel 39 televised statements from the participants, whose message was upbeat and determined, in spite of vicious anti-immigrant attacks in the commercial media. 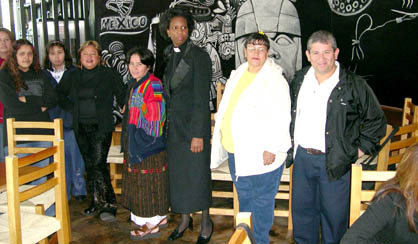 A major topic was the need to pressure the White House to grant asylum to Central Americans who have been hard hit by natural catastrophes. Participants were urged to call the White House hot line at 202-456-1111. Interest was also very high in the continuing democracy movement throughout Latin America. While the group was meeting, Evo Morales of the Movement Toward Socialism (MAS) in Boliva was winning the presidential election on a program of opposition to the giant transnational corporations that have previously had a free hand to exploit the continent. Right wing political proposals and the border militiamen were great concerns.

Supporters of one of the immigrants rights leaders, President Margarita Alvarez of “Voices for Immigrants,” are trying to raise enough money to send her to the World Social Forum in Venezuela in late January.