It Doesn't Hurt to Ask!

But the point is not necessarily to look tough; the point is to get justice for working people. For that reason, politely asking for justice is a very good tactic, especially in the initial phases of a campaign.

On May 20, a few of us went with some of the Ironworkers from Local 847 to a Dallas construction company. Marc Jacobson, Executive Director of Texas Fair Trade Watch, SMU Professor Joerg Rieger, and I joined 5 Spanish-speaking workers with experience, mostly bad experience, working for one of the big subcontractors in the industry, Great Western Erectors. Great Western has its national headquarters in North Texas and, according to those with experience, treats its mostly-Latino workforce like so much dirt.

The receptionist asked if we had an appointment. We didn't. She said to call back later because the person we needed to talk with was busy for the next five hours. We said we'd wait.

Everybody was polite. The office furniture was comfortable, and we had a lot of catching up to do, so we had an enjoyable conversation for about five minutes before one of the company's top executives came out to ask, "May I help you?" 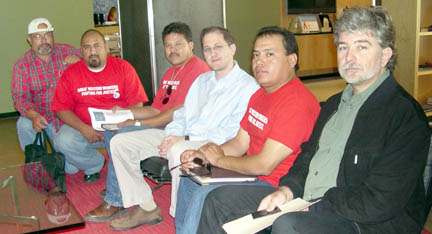 He certainly could, we told him. We asked for a sit-down, and he invited us into a small conference room. He had to drag in one extra chair.

I began by saying that the broader community had talked with workers from Great Western Erectors and had become concerned about their treatment. One of the workers gave him a packet of information documenting the poor pay, lack of benefits, and lack of basic amenities such as drinking water on those hot construction sites. Several of the workers gave some of their own experiences in English and Spanish. Among other things, they told him that even an executive who stayed in his office all day and only looked at reports could be acting unjustly if he or she were part of a system of repression.

One of us added the concern that Great Western employees deserve the same fair treatment and dignity as other workers, no matter what language they spoke or with what accent. The suggestion was made that Dallas-area community activists are sensitive to perceived racism on the job.

The executive was more than polite and even somewhat sympathetic. "I'm embarrassed to say that I'm not completely surprised," he commented during one of the workers' lamentations. Without seeming to rush, he tactfully guided the discussion toward proposed solutions. Eventually, he came up with his own. He said he knew the owners of his company and felt that one of them in particular might be interested in how construction workers, including sub-contractors, were treated on their job sites. He offered to ask that gentleman if he would sit down with us.

We gratefully accepted that offer. We all shook hands with the gentleman as we left. Outside on the sidewalk, one of the Ironworkers said that this was the best effort they had made so far. Joerg, Marc, and I agreed that the effort was good, but we suggested that we needed a larger community presence. There might be a lot more community activists in North Texas that would like to accompany us on future delegations to construction companies, and the Ironworkers wholeheartedly agreed.