The November 14 (second Wednesday) Jobs with Justice meeting at Oak Cliff Methodist Church was devoted to the health care issue. We showed the Michael Moore documentary "Sicko," and then had conversations with nurses organizing with the National Nurses Organizing Committee. We were cooperating with "Democracy for America," an organization much more political than ours, but just as devoted to health care reform.

As always, we continued our commitments to other issues in the progressive movement. We announced the immigrants' rights march in Irving for the following day. We had a report on the vote in Congress that passed a "Free Trade Agreement" with Peru. In general, National Jobs with Justice is celebrating the fact that the majority of Democrats voted against the bill, which means that we might be able to beat the other three "agreements" that the corporations were hoping to push through right away.

Margarita Alvarez has agreed to represent our chapter at a national immigration conference Dec 5 in Washington DC. National Jobs with Justice has set up a special training session for Portland, Oregon, in January.

Steve Boscardin of United Food and Commercial Workers Local 1000 asked people to attend a "Wake-Up Walmart" rally on November 19 from 4-6 PM. It will be held at 4100 W Airport Freeway in Irving (Hwy 183 at Esters Rd). 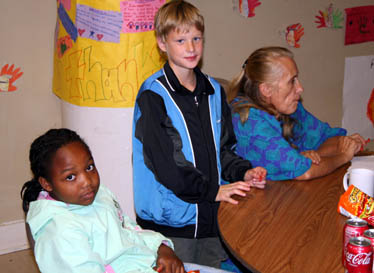 Registered nurses Nancy Friesen (pictured), who has adopted several children, asked people to check out her home-based business at www.glycosystems.com. Contact her at friesenancy@hotmail.com.