The Labor Council for Latin American Advancement (LCLAA) held its 16th Convention in San Antonio August 2-5. Well over 500 activists from more than 25 unions, representing 1.7 million members nationwide, brought their experiences together for a terrific exercise in solidarity.

LCLAA was initiated in 1973 and designed to bring people together despite all attempts by employers and politicians to break us apart. The convention welded the solidarity of different unions, different labor federations, different parts of the country, different crafts, and different backgrounds. LCLAA took on issues of organizing, fighting for immigrant rights, civil rights, women's rights, students' rights, and every imaginable kind of workplace issue.

Speaker after speaker, panel after panel, and workshop after workshop emphasized the importance of winning the 2006 federal elections for working people. Contrary to common myths, Latinos turn out to vote in high percentages. The amazing growth of the Latino voting population, along with its increasing alliance with organized labor, creates a powerful potential for influencing the outcome in November. 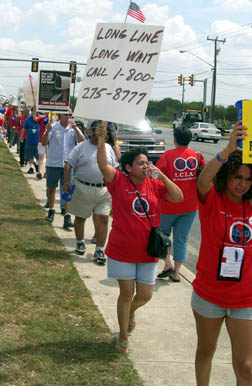 LCLAA delegates and visitors did more than talk in San Antonio. On the hot afternoon of August 4, they hit the picket lines to help postal workers defend their jobs. "Hire more clerks!" was the vigorous demand made by three busloads of activists at the main post office.

Delegates also passed 41 resolutions that covered broad social issues in workplaces in our country and abroad. It is extremely fortunate for North Texans that Jobs with Justice and LCLAA have a long working relationship. LCLAA leaders Gerardo Contreras and JR Flores of Texas Mid-Cities LCLAA played an important role in the convention. 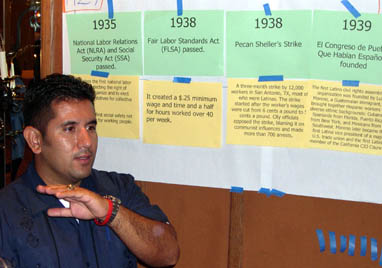 One of the outstanding workshops dealt with labor history. It is noteworthy that LCLAA speakers and workshops had a very practical view of the events that created our present situation, as well as the very grave emergency that American working people are facing. Farmworker leader Dolores Huerta emphasized the importance of the 1947 Taft-Hartley law that became a turning point for what had been a vigorous and growing American labor movement.

She also emphasized the importance of education for all workers and especially Latinos. Dr Reg Weaver of the National Education Association made a dramatic presentation. In another of the many demonstratins of worker solidarity, he was introduced by a leader of the American Federation of Teachers.