The Christian Progressive Alliance led their annual Good Friday march from Oak Cliff through the streets of Dallas on March 21. Ministers and activists from a number of religious groups participated.

We began at Lake Cliff Park, corner Zang & Colorado, with a beautiful history lesson from Sister Patricia Ridgley. She told us about Reverend Anthony Bewley, who was savagely lynched in 1860. He had been a circuit-riding Methodist minister who rode to remote towns like Bonham, where he had his largest congregation of about 50 people. After the Dallas downtown fire, Bewley was blamed for having provided some words of encouragement to slaves. Even though the rumors were very suspicious, and there was no attempt at justice, slaves were hanged or beaten for having taken part in an alleged "uprising." Bewley managed to make it to Arkansas before authorities caught him and brought him back to Ft Worth in chains. A lynch mob then killed him, then dug up his remains and desecrated them further. He was murdered in September, 1860.

Some historians say that the fire and its bloody aftermath may have been staged to panic North Texans into voting for secession and civil war.

The religious procession then went to Dealey Plaza, where Reverend Pauline Guerro spoke in front of the statue of newspaper publisher George Bannerman Dealey. She said that America misplaces its priorities because, "The greatest warriors are those who fight for peace."

Dr. Ron Wilhelm, carrying a small wooden cross, then led the procession up Commerce Street to the Federal Building. A guard tried to put limitations on the procession, but Wilhelm stood up for their rights and paraded on through to Ferris Plaza, which is across the street from the Dallas newspaper office.

Reverend L. Charles Stovall gave a dramatic ending with a short sermon that began, "Jesus Christ did not have to die." He talked about the cost of silence and the cost of speaking out. He affirmed that only those who have the courage to speak out against injustice deserve to claim to follow Jesus' example. 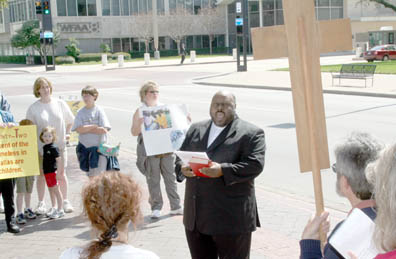