On December 6, Superintendent Hinojosa and other officials of the Dallas Independent School District added their own tributes to the life of Dallas labor leader Pancho Medrano. They dedicated the new Francisco "Pancho" Medrano Middle School at 9815 Brockbank in Dallas. It is the second "Medrano" school in the district, as one was already named for Mrs. Medrano. In 2007, a post office in East Dallas was named for Pancho.

The brochure for the most recent event listed some of the highlights of Pancho's life. It said that he was an activist who marched and advocated for workers' rights alongside Cesar Chavez and with the Rev. Martin Luther King Jr. It goes on, "After receiving training through the Works Progress Administration, Medrano became a riveter at North American Aviation Company, where he became involved in the company'srecreational boxing team. He proved to be a natural at boxing, and eventually became a professional heavyweight prizefighter."

Pancho's union career was launched when he was elected Sergeant at Arms of UAW Local 645 at North American. The union became Local 848 in 1962. By then, Pancho was well known throughout the United Auto Workers. As the civil rights movement heated up, Pancho was appointed an International Rep assigned to civil rights activities. He participated in most of the historical activities of that rough and fruitful period. He had a special role with the United Farm Workers. He was the lead plaintiff in at least two major legal actions of the time. In one of them, Pancho sued the Texas Rangers and effectively ended their union-busting days.

Pancho was a charter member of North Texas Jobs with Justice. He always marched with us in every Martin Luther King Parade up until his death in 2002. He was always dedicated to politics for working people. In his final days, Pancho got out of bed to vote one last time. Among his offspring in the audience at Pancho Medrano Middle School were a former City Councilman, a former School Board Trustee, an active School Board Trustee, and an active City Councilwoman. 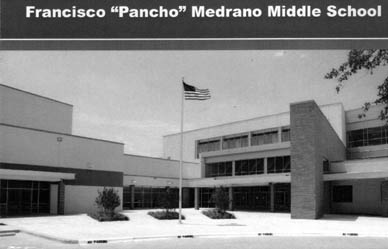