For our 16th straight year, North Texas Jobs with Justice will proudly march in the Dallas Martin Luther King Jr March and Parade. Join us on Saturday, January 14. If you're for workers' rights, you're welcome. We only ask that all signs properly reflect the life and message of Dr. King.

Most marchers will want to have their car handy at the end of the march. They should park in Fair Park, near the Martin Luther King Jr Boulevard entrance, before 9 AM. Then, they catch one of the free shuttles back to City Hall at 1500 Young Street. Look for the Jobs with Justice contingent, assigned number 27.

We drew a good number this year. Some old-timers will remember the year that they put us at the end of the parade, behind the horses and stepping very carefully. Those who remember walking through freezing rain will be pleased to know that the weather will be good.

Our January 10 planning meeting was extra special. We decided to continue with the JwJ Chapter because it is needed in

North Texas, even though there is not sufficient money to pay for staff. We had a good mix of community, civil rights, and union activists. Some activists who could not attend called in their support for the continuing chapter.

We began with the new Wal-Mart movie, then had a short presentation by Lesley Ramsey, who heads Texas Fair Trade Watch in Austin. We had a rousing good discussion about the meaning of MLK events and the way MLK's life and message is being distorted by big business and government functionaries. We ended with a unanimous resolution calling for all MLK celebrations to truly reflect the life and message of Dr. Martin Luther King Jr.

Several other MLK celebrations were noted: The Dallas Peace Center will present non-violence training at the Dallas Public Library on Sunday. The Elite News in Dallas, the City of Grand Prairie, and the City of Ft Worth all have parades on Monday. By far the biggest event in North Texas, and the only one with national news coverage, is the Dallas March and Parade. See you there! 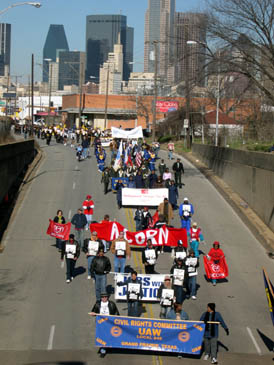