As we have done several years back, Jobs with Justice is initiating a downtown Dallas demonstration on the first day of early voting. We will gather at the Records Building, just across Elm Street from the Old Red Courthouse, at 11:30 AM October 20. Some of the Communications Workers members who work downtown are expected to join us then. 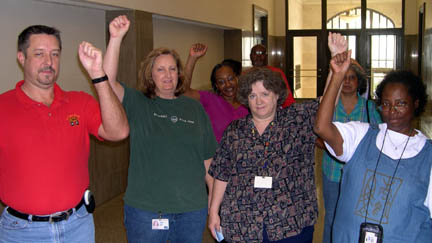 Early voting is easy in Texas. Voters do not even have to go to their respective precincts, but can vote at any facility they find open. The newspapers list the early voting places.

The Texas Secretary of State web page has all the election information on early voting:

We are sending this out Oct 17:

RALLY MONDAY, October 20, at 11:30 AM by the Old Red Courthouse in downtown Dallas!

Jobs with Justice will join the union folks who want to publicize the first day of early voting. At this point, there is no more important goal than a gigantic voter turnout! Bring your own signs if you like.

FIGHT THE FRAUD as usual, people who are against our right to vote are screaming "voter fraud" and blaming poor working people. ACORN, a group that we often work with, is their present target. The charges are ridiculous. National union leaders have called for us to defend ACORN. As Texas AFL-CIO President Becky Moeller recently said, there is a lot more voter fraud committed ON workers than BY us!

Because of anti-worker fraud in the last few elections, we are asked to be prepared when we go to the polls. DO NOT try to vote straight ticket AND for individual candidates - just do one or the other. Carry this "voter protection" phone number with you: 1-866-OUR-VOTE. Attorneys will answer that number and resolve issues while you wait. My radio show on Wednesday will be dedicated to exposing efforts to keep people from voting. 8-9 AM every Wednesday, KNON, 89.3FM, www.knon.org. Call-in 972-647-1893.

WE DID GOOD on the movie "Battle in Seattle." Jobs with Justice efforts helped bring it to the Dallas Angelika Theatre for one week and one extra showing. At the final showing, October 10, Dallas AFL-CIO President Nancy Hall gave a fine talk against the proposed "Colombia Free Trade Agreement." Walt Harrison has filmed it and will file on YouTube under the name "Colombia Gobblelization Talk." It should be ready by Monday.

EMPLOYEE FREE CHOICE SIGNUP CARDS are being collected by National JwJ. If you have some filled out, please bring them Monday. They have over 850,000 at last count!