The Dallas Peace Center held its annual "Stakeholders Meeting" on January 5 in East Dallas. Committed activists studied an amazing array of past victories and future challenges. Director Lon Burnam expressed his pride in the organization as it begins its 27th year, but he asked for more volunteers to lead the Center's many activities. 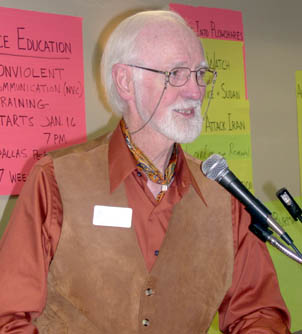 The fund raising and long-term planning committee was the largest committee, and the one with the hardest jobs. Reverend Bill Matthews gave a glowing report that outlined what needs to be done over the coming year. Matthews also agreed to appear on KNON's "Workers Beat" program at 8:05 AM on Wednesday, January 9, to further discuss the prospects for peace and the efforts that will be needed. He may be heard on 89.3 FM or www.knon.org. The call-in number is 972-647-1893

Board President Delia Castillo heads up the committee on Dismantling Racism. Among other things, they explain the relationship between racism and aggressive wars. Ms Castillo will lead peace activists in the Jobs with Justice contingent at the annual Dallas Martin Luther King Parade, which begins at 9 AM on Saturday, January 19, at Dallas City Hall.

The Communications Committee discussed the improvements being made to the printed Peace Times and the web page at www.dallaspeacecenter.org. Roger Kallenberg, who led the committee ably, will move to another committee. Gene Lantz has agreed to take the Chair. The newspaper has begun taking advertisements. One idea was to look for signers on important statements relating to current events and peace. Most people could afford a "business card" sized ad. For rates and other information, call 214-823-7793 or e-mail office@dallaspeacecenter.org.

Jay Johnson gave a report on the extensive Peace Education plans. The Swords into Plowshares committee, headed by Valley Reed, works to convert military operations into peaceful economic use. Special committees have been formed about military threats to Sudan, Iraq, Iran, Burma, and Cuba. There are committees on the Death Penalty, SOA Watch, Nuclear Free Texas, and Awards Ceremonies. Many of the long-term committee chairpersons would like to begin other activities; consequently, leadership is at a premium.