Peace activists held a strategic retreat at Grace United Methodist in East Dallas on January 5. Liz Wolff, outgoing Board President, coordinated the meeting with input from the new President, Delia Castillo, and committee heads. Lon Burnam, Executive Director of the Dallas Peace Center, provided guidance on the issues. Several activists from the Peace Action Coalition in Tarrant County attended, along with 35-40 from Dallas.

The group reviewed an impressive list of peace activities during 2006. The Dallas Peace Center sponsored basic education, more general education, public events with major speakers, and street actions to promote peace in every corner of the globe. They also partnered with civil rights organizations to make a major presentation on systemic racism. 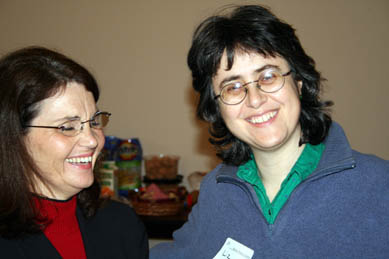 Lon Burnam summarized, "It was a great year! It was made possible by the people in this room. We just need to expand our base and do more."

They projected an even larger effort in 2007. Several activities had already taken place since the announcement of the 3,000th American serviceperson (a Texan) to die in the Mid-East. Hadi Jawad announced a street action outside the Dallas Federal Building, 1100 Commerce Street, noon to 2 PM on Thursday, January 11. The occasion is the 5th anniversary of the first military prisoners being brought to the U.S. interrogation center at Guantanamo, Cuba. 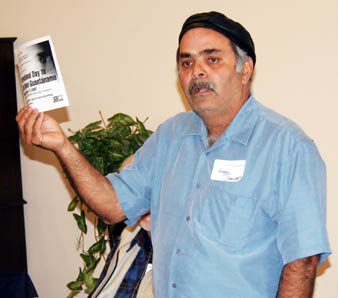 Hadi Jawad called for an action on January 11

Raising the money to keep the Peace Center going and to promote peace in North Texas is a major challenge. Potential donors can find out all about the institution and how to contribute at www.dallaspeacecenter.org.

Jan Sanders, Lon Burnam, and Valley Reed were among those doing careful thinking