Contract Ratification Vote is Only Part of the Union Drama

On October 15 at 3 PM, members of UAW 848 gathered at their union hall to consider a proposed new contract. It was a matter of the gravest concern for them and their families, as the new contract would govern most of their wages, benefits, and working conditions over the next period.

Their story had started much earlier. More than two years before, Local 848 members had elected some of their most trusted co-workers as the union local's Elections Committee. These people versee all elections, including contract ratification elections. All union members are painfully aware of when their contract will expire. They have the dates on the front of the written contract book that almost all of them keep in their workplace. Contract expiration was October 15 for these workers.

A year or so before, some of them had begun paying more than the usual amount of attention to union activities. In addition to regular membership meetings and committees, they began coming to special "solidarity" meetings where they would discuss workplace activities and begin to fashion their ideas as to improvements in their union contract. By working and talking together, their ideas took a collective form.

As expiration date grew closer, more and more became involved. People began wearing more union insignia, especially T-shirts, within the plant. They began to ask and find out who were the non-members that drag the union down. They began to write down their contract suggestions and forward them to the union hall.

Meantime, the UAW International throroughly researched the company, the industry, and similar union contracts. They updated and trained their International Rep to help guide the local. None of this was easy, none of it was inexpensive.

Finally, as only a few weeks remained, the Negotiating Committee, top officers from the Lockheed unit of the local union led by the president of the local and advised by the International Rep, began their final preparations. They then met with management's appointed professionals. One can imagine their starting point: the union wanted everything, and the company wanted them to have nothing.

Negotiators talk of hard work and long hours. They talk of the growing esteem they feel for their fellow negotiators. They talk about the great burden of knowing how many families depend on their effort. If they feel the membership's confidence in them, it's a little easier, but not much. 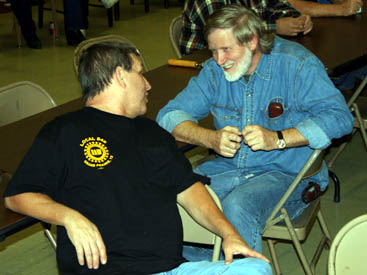 Finally, as on October 15 in Grand Prairie, the negotiators present the best contract proposal that they have been able to wrest from management. The President of UAW 848 gives a thorough explanation of every point, the good along with the bad. If the Committee considers it worthy, they recommend it to the membership.

If they think that management has held out and could afford a much better contract, they don't recommend the proposal. All the members, especialy the negotiators, know the consequences if the proposal is rejected -- the membership will likely be forced to take concerted action, even a strike. A strike is the most painful aspect of labor relations; nobody wants to do it. Some of the members are aware that the Machinists' Union at Bombardier, in Wichita, Kansas, is already on strike. The Steelworkers in Tyler, only 70 miles away, have been forced out on strike, too.

The happy ending to this particular story is that Lockheed members of UAW Local 848 ratified their contract proposal by 84%, then went to work the next day with full confidence in their wages, benefits, and working conditions for the next years -- until the next expiration date! 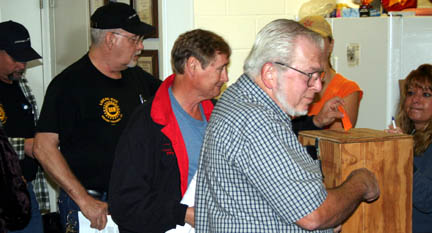