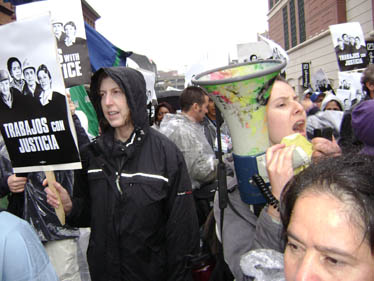 The National Jobs with Justice conference May 2-4 in Providence, Rhode Island, showed that the organization is continuing to grow, continuing to militantly defend workers' rights, and continuing to be the American group most committed to action. "Ah," readers of this page will say, "but that's nothing new..."

Audiences were on their feet yelling and clapping as much as they sat down. Workshops on health care, right to organize, and other hot topics were exciting to the point of exhaustion. There was a giant march on the Rhode Island State Capitol in defense of state workers. National Co-Ordinator Sarita Gupta announced proudly that the group had exceeded its goal of tripling its activist data base, and that 45 active coalitions now belong directly to the network. Each coalition includes unions, churches, community groups, civil rights organizations, and occupation groups not easily incorporated into the legal and traditional structures of unions. Like our group in North Texas, each group also has working relationships with virtually every union and progressive organization around. It's a big and extremely progressive network of relationships.

OK, here's the new stuff: Jobs with Justice has begun to organize working people far beyond unions. Domestic workers, independent taxi drivers, day laborers, security guards, former prisoners, mobile home owners, tenants, imported immigrant construction workers, and other hard-to-organize groups now look to Jobs with Justice and its associated networks for help in organizing. Their confidence is rewarded with success after success, as explained by speakers at the conference. At the same time, the organization's commitment to organized labor continues, as shown by its commitment to national health care, fair trade laws, and the right to organize as codified in the Employee Free Choice Act. One JwJ goal is to gather 1 million signed commitments for this vital American legislation!

Sarita Gupta took note of the giant upsurge in American activism, which she referred to as a "sea change." She announced that JwJ will begin a long and careful strategic planning program to guide the organization through the new situation.

Internationalism was evident throughout the conference. A raffle was conducted to benefit Colombians, and a large group of workers from India took the stage to explain their militant fight to make American contractors live up to their promises. The men and women from India had already marched from New Orleans, where they were brought as cheap labor for hurricane Katrina disaster clean-up, to Washington DC. They announced that they would begin fasting for justice on May 14. The Jobs with Justice Education Fund is conducting a world-wide fight for living wages that includes worker correspondents and cooperating organizations in Asian nations. 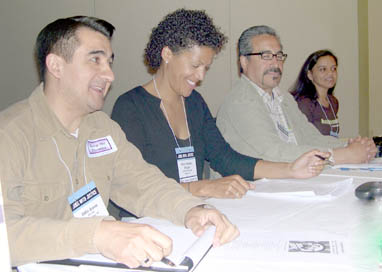 Hardly any sector of the world working class, hardly any concern of workers, was overlooked during the two day conference. At a workshop on "Low-wage Workers and Workers' Centers," AFL-CIO staffer Eddie Acosta (pictured at left) revealed that the national labor federation now recommends that local Central Labor Councils incorporate workers centers into their networks. That is an amazing development! Acosta's comments were recorded for KNON radio in Dallas, www.knon.org, and will probably play on May 21 between 8 and 9 AM.

In the same workshop, JwJ of Vermont leader James Haslam explained,
"It's time for the labor movement to organize the people, not just the jobs."

Workers centers are born in various ways. Sometimes a failed union organizing effort leaves behind a constituency of workers for a center. Some are started as legal-aid "hot lines." Some begin as counseling services for immigrants. Some begin as day-laborer centers. In virtually every case, the organizations would not qualify as traditional unions and would not meet the legal requirements for government supervision as labor unions -- and yet they are still organized workers!

Joycelyn Campbell of Domestic Workers United in New York will explain how maids, nannies, and other household workers came to join her powerful organization on www.knon.org. She said that farmworkers and domestic workers "still live in shadows of slavery" and have virtually no rights under American labor law. She added, "We have to change this system."

During the summary session, Terence Courtney, organizer for Atlanta JwJ, said, "I have detected a radical shift in JwJ. I hear people talking about class struggle… it's always been there, but it's important to use it in our language. Now we are talking about going on the offense." 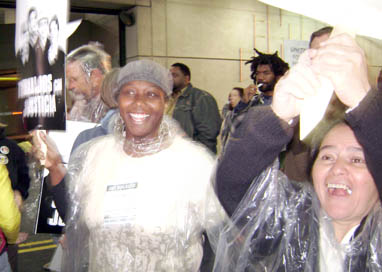