Protesters flocked to Townview Magnet School when George W Bush did his publicity stunt there on February 4. Even though his cronies just cut over $11 billion from student loan money, the compliant North Texas "news" persons allowed Bush to pretend he favors education. Outside, police in cars, police on foot, police on horseback, police with guns, police with binoculars, police with cameras, and every other kind of police removed the protesters out of sight.

Jasmin Thomas and Sandy Rollins were among the last protesters who removed from the area. 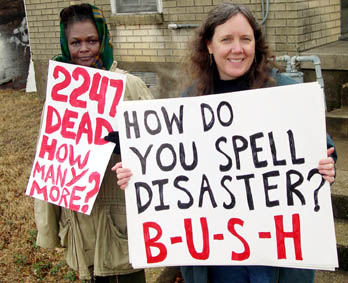