Jobs with Justice Joins with Women to "Stir the Pot"

The AFL-CIO reported that 364 different "Stirring the Pot" gatherings were held across the nation on the evening of October 10. The purpose was to review women's issues and discuss ways to resolve them. North Texas Jobs with Justice worked with the Coalition of Labor Union Women (CLUW) to hold a pot-luck dinner at 1408 N Washington. Elaine Lantz and Cindy Fitch organized the event and conducted a rich discussion of people's personal views of the issues.

Outsourcing jobs was the first topic raised. One participant said that his Dad had lost his high-tech job after 24 years. A dramatic contribution then made the point that generations of Americans have been told that they would have steady careers if they were educated, but "education doesn't seem to matter any more!" Thousands of jobs continue to be outsourced, but Cindy Fitch made the point that the unions are fighting to keep jobs here. Her union, the Communications Workers of America, recently announced that 800 outsourced jobs would be returning home.

Union busting and the diminished right of Americans to organize was a hot topic. "They do anything to get rid of the union," was one comment. New automobile factories are being built in this country, but management fights hard to keep unions out. Toyota in San Antonio was an example given. The Kentucky River decision by the National Labor Relation Board was explained by Elaine Lantz, who has kept up with Job with Justice's ongoing national fight. The decision may take union rights away from millions of Americans.

One solution given was to re-negotiate the so-called "trade" bills that enable big corporations to do anything they want on any side of any border. People also advocated minimum wage and living wage drives. All of these are long-term Jobs with Justice projects. 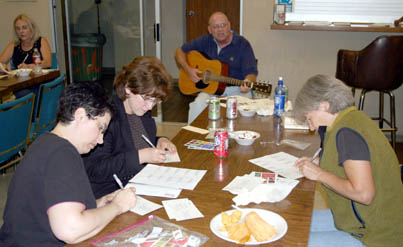 Professional singer/songwriter Kenny Winfrey, a member of UAW 848 in Grand Prairie, performed "Union Maid" and "Which Side are you On?" for the gathering. Participants filled out post cards urging women to get active.

Wages and benefits are a main concern whenever workers talk together. Our "Pot Stirrers" remarked that CEO wages should be curtailed. They should have their wages based on workers' wages. Speakers especially wanted to tie the wages of U.S. Congressmen to the minimum wage. Anti-worker spokespersons are advocating a national sales tax, which would make matters far worse for workers while continuing the trend of lower taxes for the rich.

Health care took a big part in the discussion. The loss of CHIP coverage for Texas children and the terrible load being placed on Parkland Hospital in Dallas were local examples of problems. The point was made that Parkland's case load is 78% citizens and only 22% immigrants, who only get emergency care. In Denton County, people cannnot qualify for "indigent care" if they make over $172 per month! A solution was to copy Canada, which apparently did away with many health care insurance companies! "Insurance companies gamble on our health!" was stated.

To implement the suggestions that were made, all of the participants agreed that getting active in the November elections was the task at hand.